HISTORY OF STEEL – Steel in War

Charles Schwab, president of the United States Steel Corporation, was now president of another company called Bethlehem Steel. Two months after the start of the First World War, Schwab got an order for $40 million worth of weaponry from England, all of which was a secret.

The condition was that Schwab would not do business with the enemy nations of England. Furthermore, Winston Churchill, then First Lord of the Admiralty, gave an order for Royal Navy submarines to face German U-boats.

However, laws in the United States prevented American companies to aid other fighting nations on either side of the trenches. Regardless, Bethlehem Steel sent submarine parts to an assembly plant in Montreal in the name of humanitarian rebuilding. The laws regarding American aid to other nations became null and void, as the United States of America became a participating nation in WWI in 1917. America’s annual steel production was 23.5 million tons in 1914 when the war had started. By the end of the war in 1918, this production became double. Steel from the US gave a competitive edge to the Allied Powers over the Central Powers in the war.

Post the World War I, American steel, which was abundant in production, was used to build the New York and Chicago skylines. The two major players—Bethlehem Steel and the US Steel Corporation—provided steel that was used in the construction of the Rockefeller justify, the Golden Gate Bridge, the George Washington Bridge, the Chrysler Building, and the Empire State Building, which alone used 60,000 tons of steel to become the world’s tallest building at the time. Steel was also used in cars, food cans, and home appliances. Eventually, the values of US Steel and Bethlehem Steel were higher than that of General Motors and Ford Motor Company.

However, the steel production slowed down, following the Great Depression of 1929. While hundreds of steelworkers were laid off, the mills still churned the metal, which was used for railways and canned food. In the 1930s, steel was used beer cans. The Blue Ribbon Export Beer by Pabst became widely popular across the country. On the other side of the Atlantic, Germany occupied land in Denmark, Norway, and France, and gained control of the iron and steel mills. Germany started producing as much steel as the United States. Further east, Japan acquired the iron and coal mines of Manchuria.

After the Pearl Harbor attack, the production of most steel consumer goods was banned by the government of the United States. The focus was shifted to producing steel for tanks, guns, planes, and ships. The mills in the USA ran 24/7 with hardworking female workers. Consequently, steel production was three times more than that of all other countries. The fact that the United States produced 25 times more steel in WWII than it did in WWI, helped the Allies again in their victory.

After the Second World War, the US government lifted its ban on the production of steel consumer goods. As America was producing so much steel, the industries of home appliances, cars, toys, and construction boomed, and so did their respective markets. Steel was recycled from old ships and tanks and was used to manufacture beer cans and build bridges. 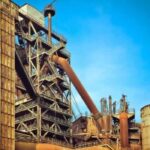 HISTORY OF STEEL – The Journey to Modern Steel